Greetings, Wagoners! Long time no see…I’m sorry to say that real life events and travels have taken me outside the range of the local subspace relay network lately. But the Star Trek: Discovery trailer hit the other day, and you know I had to get my two credits in. Set a course for screenshots and SpaceStationWagon commentary!

YELLOW ALERT: No spoilers, unless you want to avoid learning names of some characters/concepts. I avoid spoilers like Rigellian Fever, so all plot suppositions are entirely my own.

Scuttlebutt has it this series is set in the “Prime Timeline” depicted in TOS, TNG, DS9, and Voyager. The recent JJ Abrams Star Trek films take place in what has come to be known as the “Kelvinverse,” an alternate timeline created by the destruction of the USS Kelvin by Nero in 2009’s Star Trek (where exactly Enterprise fits into all this is a subject of much debate, and is a tangent for another time). 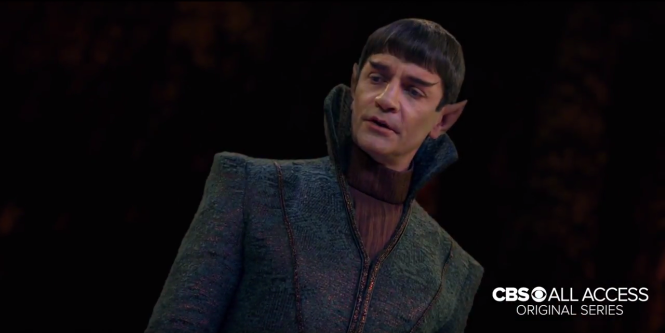 a choir of Klingons

Even if Discovery is set in the classic Trek universe, it takes a lot of visual cues from the new movies. The uniforms in the trailer are very reminiscent of Enterprise NX-01’s jumpsuits, the Kelvin uniforms in ST09, dress uniforms in ‘09 and Into Darkness, as well as the “field jackets” and USS Franklin jumpsuits from Beyond . They also kind of remind me of the landing party jackets in “The Cage,” the first pilot episode for TOS (shown in order below):

There’s a lot of other visual similarities, like the “warp effect” and aliens having the JJ Abrams movie look. Despite the recent rights kerfuffles between CBS and Paramount (Paramount owns anything to do with Star Trek movies, while CBS controls Trek TV…and never shall the two meet) the showrunners are creating a visual style matching the movies, which makes sense. You want to present a unified front, and not confuse casual (hopefully later die-hard) viewers.

I get the feeling that the actual setting doesn’t matter and this show could fit in either world, which is fine by me. If the series must be a prequel (gross) it can at least make an effort to strike out on its own, and not be beholden to what came before. So long as the show remains true to the spirit of Star Trek…that we can always try to be better, that we can befriend and work alongside those who are different from us, and that there are more things in heaven and earth than are dreamt of in any philosophy…I don’t care if it’s a reboot or alternate timeline or if all took place in a snowglobe. The world could use some wonder and thinly-veiled social commentary injected into it right now.

a corridor aboard the USS Shenzhou

All in all, I am PUMPED for this series. I love Star Trek and I hope that it hasn’t run its course…I want it to impress and inspire, for this to be a great piece of television and not a warming over of old ideas. With Discovery’s daring departures from what’s come before and its great cast, I think it’s got a shot.

Doug Jones as an alien crewmember