With just a few more days until his origin story blasts into theaters, let’s delve back into the lost lore of Han Solo and Chewbacca. Tonight’s transmission concerns one of the first stories in what would later be known as the Star Wars Expanded Universe; Marvel Comics’ Star Wars #7 – “New Planets, New Perils!” 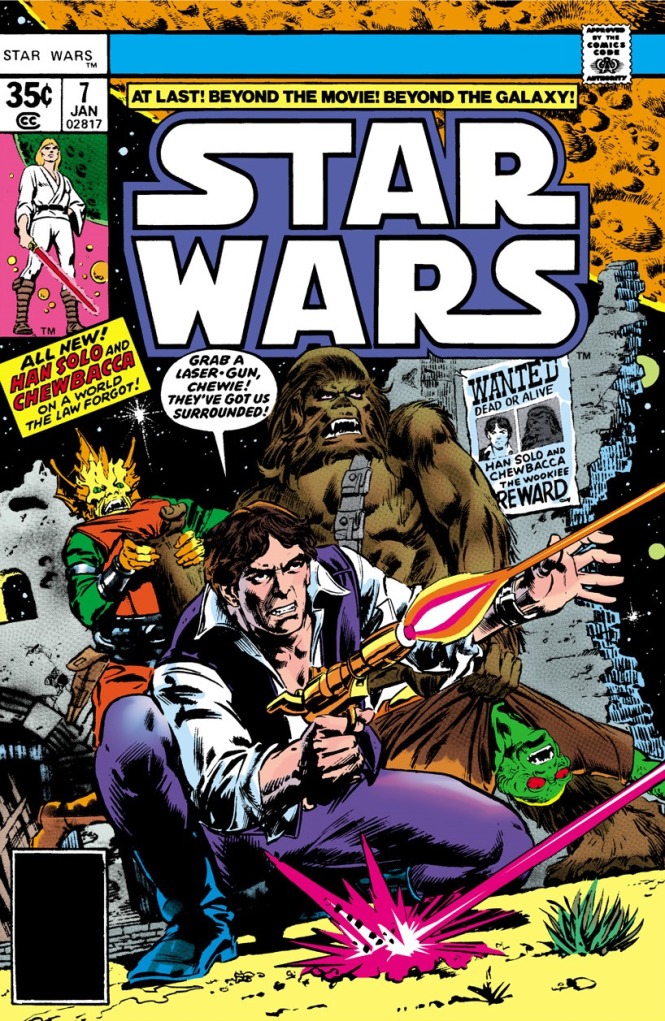 “New Planets, New Perils!” was co-written by comic legends Roy Thomas and Howard Chaykin, illustrated by Chaykin and Frank Springer, and was the first original story  released by Marvel in the Star Wars monthly title following their smash hit adaptation of the film in issues 1-6. It might not be the very first spinoff story; that honor may go to “The Keeper’s World,” an adventure featuring Luke, Leia, and the droids serialized in Marvel Comics Pizzazz Magazine. Pizzazz #1 is dated October 1977 and Star Wars # 7 shipped in September/October of that year with a cover date of Jan ’78 – since both were probably under development around the same time in Marvel’s bullpen (and both co-written by Roy Thomas!) the answer is academic. 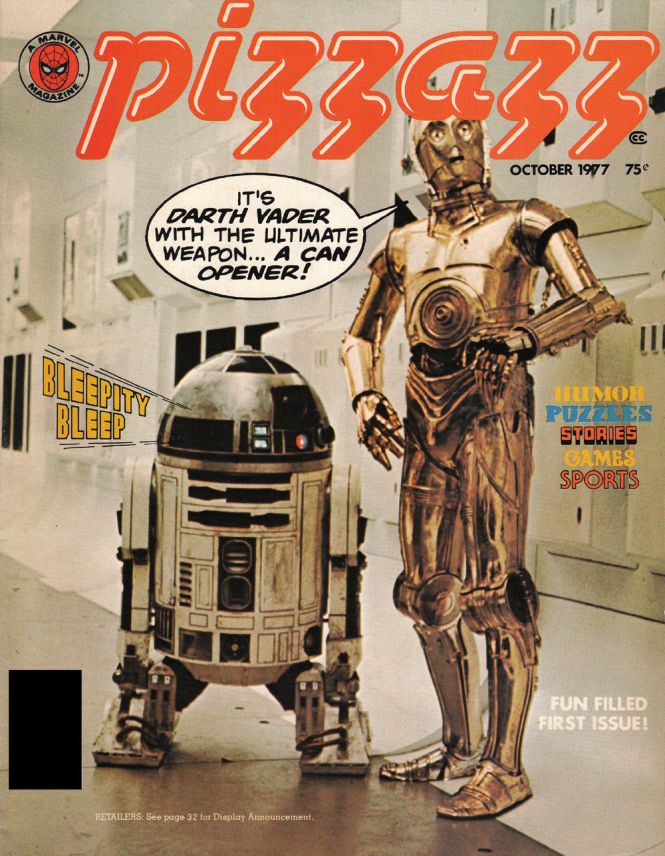 note the Dantooine/Tatooine flub in the first panel

The tale picks up immediately where the film left off; the Death Star has been destroyed and the Rebel Alliance is hanging around their base on Yavin IV, pleased as punch. But Han Solo has unfinished business, namely all the credits he owes to an infamous space gangster. The duo takes their reward from the Alliance and makes a beeline for Tatooine to give Jabba the Hut(t) what he’s owed, but the best laid plans of Wookiees and men often go awry. 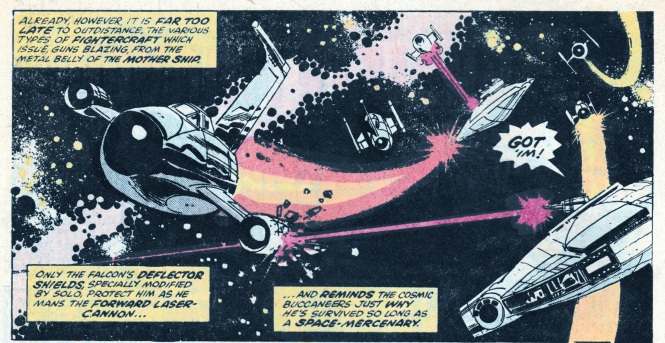 The Millennium Falcon is captured by a gang of space pirates in a stolen Imperial Cruiser captained by a gentleman named Crimson Jack. Jack’s got great gams, and boy does he like to show ’em off: 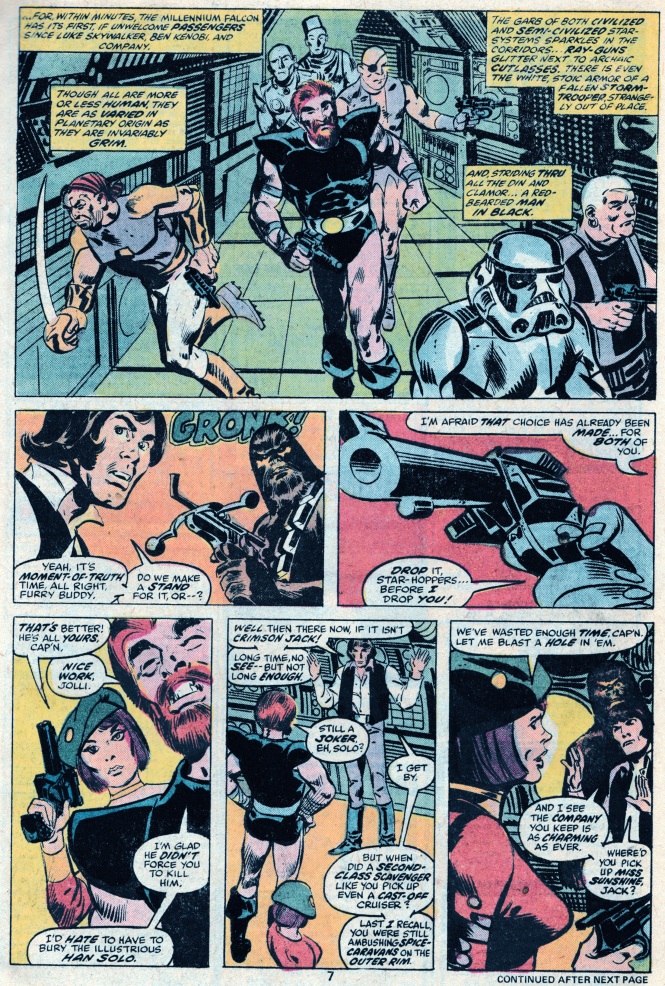 Crimson Jack makes off with Han and Chewie’s loot, leaving the duo broke as a joke and ruining any chance they have of making nice with Jabba. The pair heads for the fringe of the galaxy to hide out on a world even more remote than Tatooine (and with a lot less going on); a desolate rock called Aduba-3: 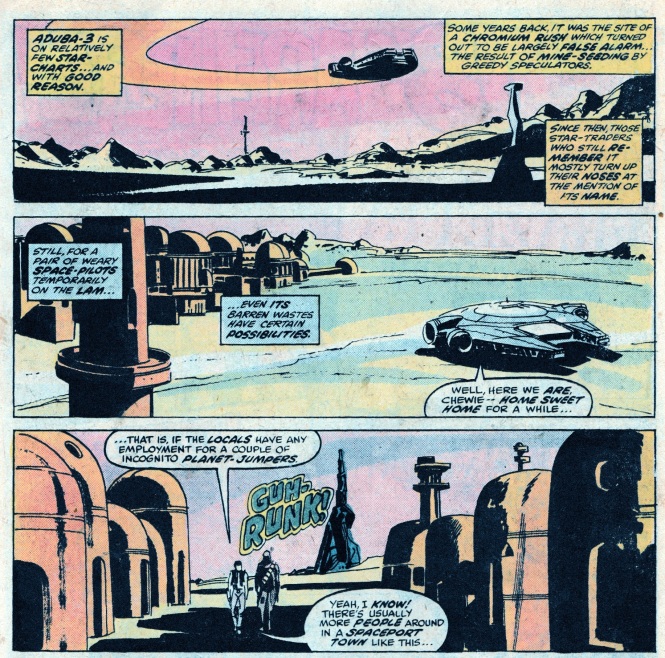 Though “New Planets…” stands on its own as a self contained story, it’s also the first book in a multi-part saga that spans Star Wars issues 7-10. Commonly known as “Eight for Aduba-3”, the tale is essentially “Star Wars does Seven Samurai/The Magnificent Seven.” It was here Marvel introduced Jaxxon the green rabbit, one of the most reviled and ridiculed Star Wars characters. I personally don’t get it, he’s a total badass (he’s certainly no Jar Jar Binks, as some fans make him out to be): 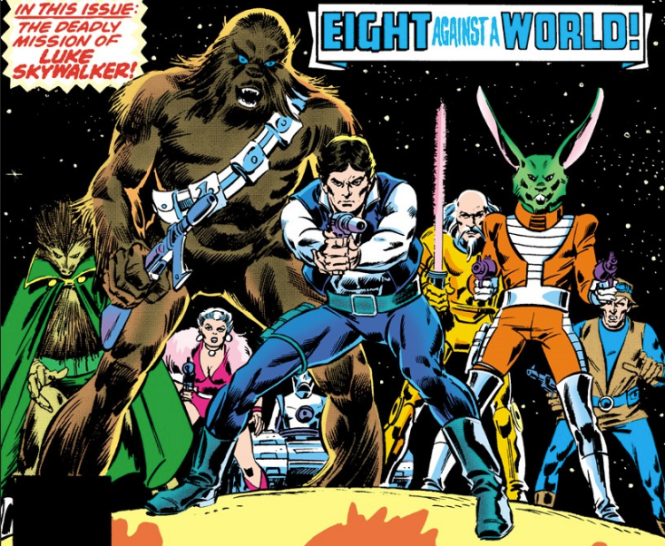 As in The Magnificent Seven, the story opens with a dispute about who gets to be buried in the town’s Boot Hill. We learn that the galaxy far, far away has a day called “Sunday,” religious education is commonly taught on that day, and that Han Solo ducked out of it a lot as a kid (natch). We see the disdain for droids in the galaxy first shown in Star Wars (notably by the bartender in the Mos Eisley Cantina) extends to cyborg beings: 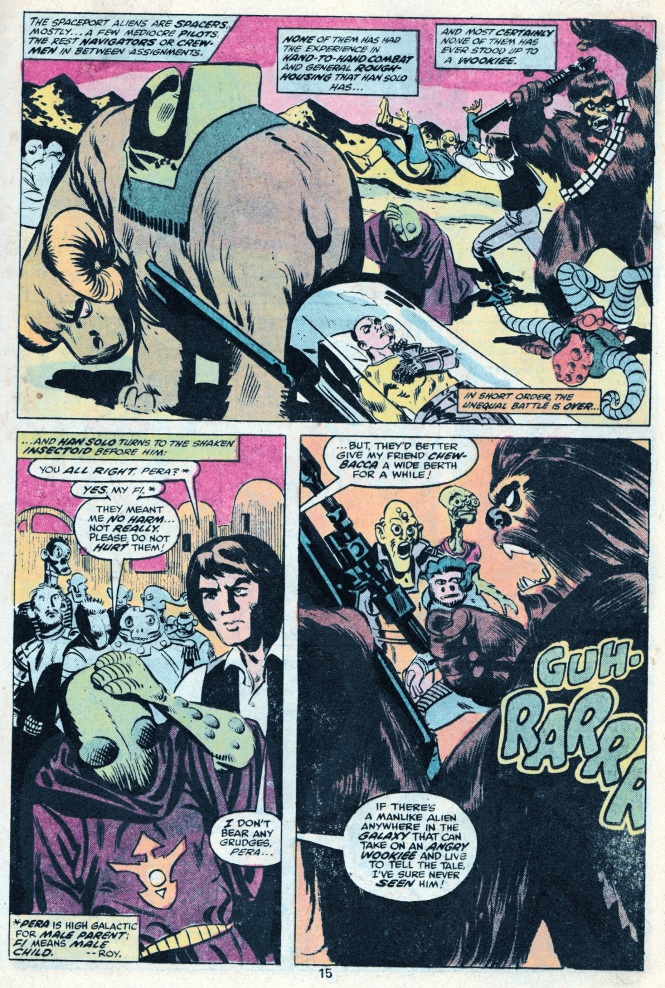 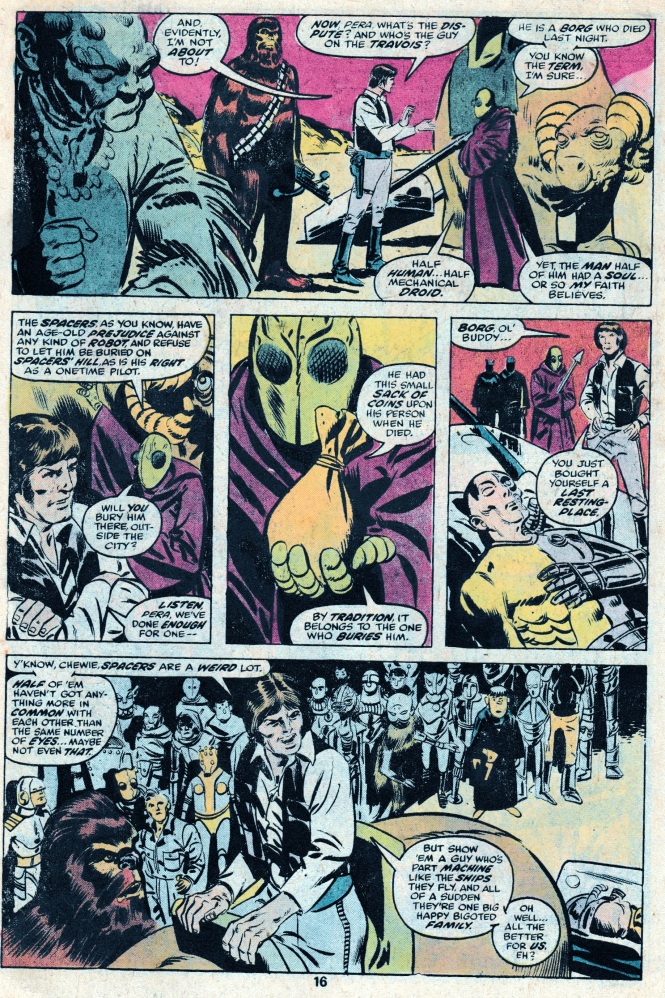 Things get ugly as the crowd of spacers try to block Han, Chewie, and the preacher from getting the ‘borg up the hill, but after a firefight they manage to get the half-metal man to the cemetery for a respectful burial (and we learn a fun fact about Wookiee linguistics): 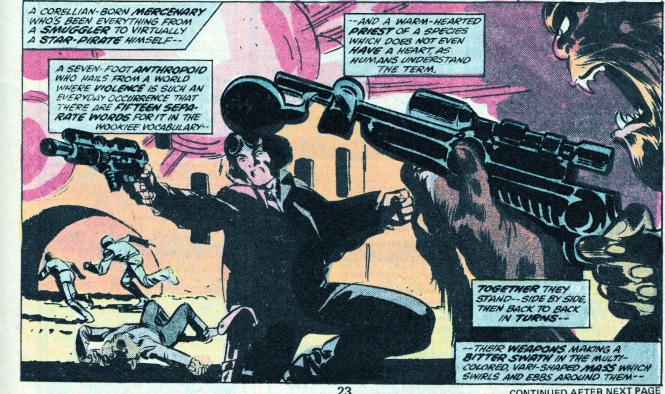 (If you’ve never seen The Magnificent Seven, this bit is lifted directly out of that film):

So how about that adventure, eh? The cynical Han Solo, a defender of cyborg rights! Did the self-interested smuggler do it for the dead man’s coins, or had Luke’s idealism rubbed off on him? Maybe a man’s right be laid to rest is one thing he held on to from his Sunday School days.

Well, not much more left to do in this issue but to make time with some fantastically dressed space ladies (is that Garnet from Steven Universe!?): 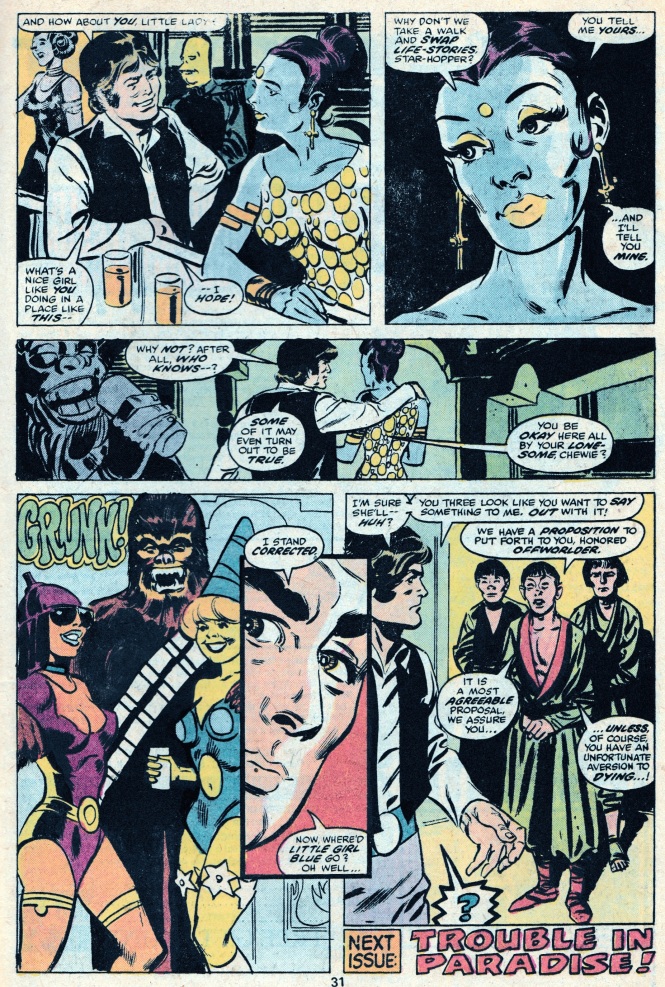 Whuh-oh! Now that’s a cliffhanger in the classic Marvel Style…wonder what these guys want with our favorite scoundrel (if you’ve seen The Magnificent Seven you probably get the gist). The following issues are an excellent adventure with a speeder bike gang, some giant bird men, and a big green bunny. Oh, and Crimson Jack? Yeah, you see his dancer’s legs again. “New Planets, New Perils” and “Eight for Aduba” are interesting bits of Star Wars history, being some of the first stories in the saga from someone other than George Lucas. Issues 8-10 were my introduction to the wacky, wonderful world of original Marvel series years ago; and I recently found a beater copy of #7 for $2. If you can’t find the original books in a bin somewhere, the stories are readily available in reprints from Dark Horse Comics and Marvel (since the SW license is back in their hands now).

Fun Fact: Howard Chaykin, the co-writer/illustrator of this story (and of the movie adaption before it), once serenaded me when I met him at a convention. I shit you not. He said “you know I can sing, too” and just started belting out old standards. Ask my wife, she’ll back me up on this.

Keep flying out this way   for more Solo Stories from beyond the Outer Rim!