What a weekend! I didn’t even know Star Trek Beyond was out, then my friend sends me this:

As a certain Vulcan would say; “fascinating.” I’m glad that Star Trek will be coming back to television where it belongs. Well, not television per se, but CBS All-Access, that network’s attempt to hone in on the Netflix/Hulu game. I would go on at length about how Star Trek should be accessible to all; that such a markedly mercenary move is antithetical to the show’s philosophy (seems like an idea a Ferengi came up with); and that this isn’t a good idea because chances are the target viewer already has a few subscription streaming services…but I won’t. I’m sure it will find its way onto the wider internet within a few hours of being released on the CBS service. Now enough with guys-in-suits bullshit, let’s take a look at that starship:

The teaser shows the launch of a starship named USS Discovery from an asteroid-based installation, followed by the new show’s logo. A bit of SpaceStationWagon trivia for my readers: when I built my own Starfleet out of Legos back in the day I often used the name USS Discovery for my starships (a tribute to the Space Shuttle and 2001: A Space Odyssey). The name isn’t the only familiar thing about this vessel, in fact I’ve been looking at this ship almost my entire Trekkie-life!

I caught Trek fever like a case of Vegan choriomeningitis as a lad in the 1990s, when there were was at least one spin-off show in production at any given time. The Next Generation was rerun every weeknight on the local Fox affiliate, and I caught Deep Space Nine and Voyager on the church channel late on weekends. I didn’t often see the original series itself, it was usually only on the SciFi Channel (which we didn’t have at my house until much later). But it wasn’t just the TV shows that stoked my Trek-fire; the public library in town was well stocked with licensed material, notably the Star Trek Encyclopedia, The Next Generation Technical Manual, and a fascinating book titled Star Trek Phase II: The Lost Series. 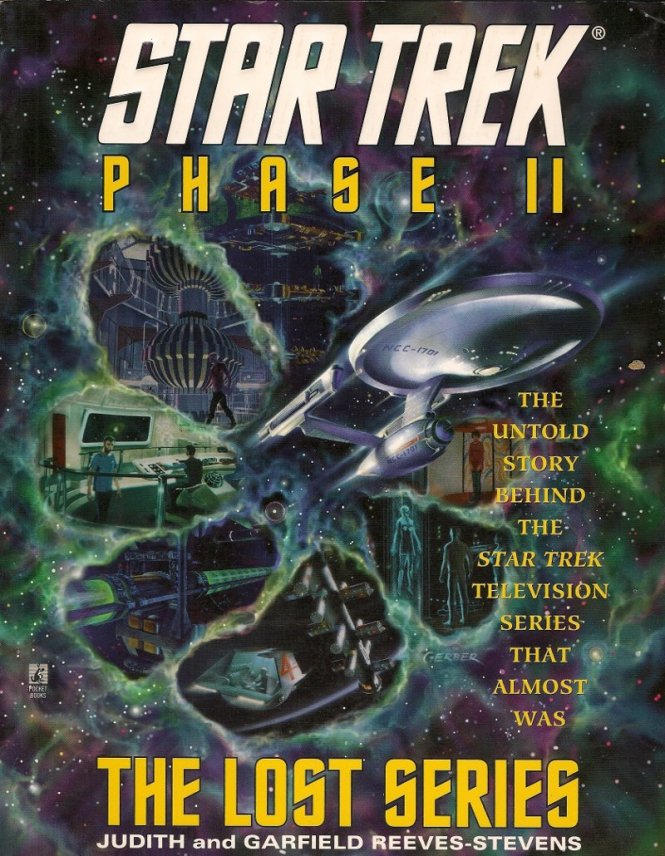 This intriguing look at what might have been (which I recently got on Amazon) documents the various attempts to re-start Star Trek in the 70s after the cancellation of the original series. The primary focus is on Star Trek: Phase II, a planned TV show that eventually morphed into Star Trek: The Motion Picture, but an early chapter focuses on a funky false start film known as Star Trek: Planet of the Titans. Titans didn’t get far before being jettisoned in favor of a new series, but famed production designer Ken Adam (known for his set designs on the James Bond movies) made a few preliminary sketches of a redesigned starship Enterprise while he worked on the project: 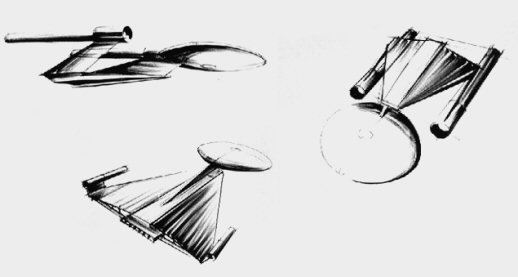 To further flesh out the new starship for Titans, Adam appropriately hired a Titan of an illustrator who had just finished work on the soon to be released Star Wars; a legend whose work defined an era of science fiction. Ralph McQuarrie’s brushstrokes are all over Star Wars, Battlestar Galactica, Close Encounters of the Third Kind, E.T., Indiana Jones, and also this obscure corner of the Star Trek universe which will soon come to life on screens across the world (for more about Ralph, read this awesome post at my friend’s quadrant of the internethersphere, The Cyclops Lanterns). Both the starship Discovery and its asteroid berth are lifted right out of a few stunning illustrations (with a very Star Wars flair) that McQuarrie did for Planet of the Titans, down to details like the blue circular lights surrounding the docking bay’s opening.

This is not the first time Ralph McQuarrie’s work has been recycled essentially unchanged; the Star Wars universe has benefited heavily from his backlog. His style and design touches can be seen all over the Prequel Trilogy, in The Force Awakens, and especially in the animated show Star Wars: Rebels. One could criticize modern day creative teams for just copying and pasting his images, but I can forgive them. Such inspired and fantastic designs deserve their day in the stars.

I’m excited about Star Trek: Discovery, but a bit apprehensive about the setting. The ship’s registry number (NCC-1031) being lower than the original Enterprise’s (NCC-1701) suggests this show may be a prequel…not exactly boldly going where no one has gone before, eh? But I’ve also heard that it may be an anthology show; if so perhaps some of it will be set beyond the well-tread 23rd and 24th centuries. Regardless of the time period I give a thumbs up to seeing this ship design in action, and am thrilled at the prospect of a new Star Trek series. The music in the teaser really gets me pumped!

A Parting Triviagram: McQuarrie’s Triangleprise has actually been seen onscreen in the Trek universe in the form of two study models made during the Planet of the Titans project. One can be seen in the background of the spacedock at Earth in Star Trek III: The Search for Spock, while another showed up a few times as a derelict ship in The Next Generation.