Star Wars Fever is in the air, as Episode VIII bears down upon us like a Star Destroyer chasing a Rebel Blockade Runner. I was pumped when they announced the film would be titled The Last Jedi, but also had a slight “nerdier than thou” smirk. You see, there is already a Star Wars tale called The Last Jedi:

Cost: I think it was five bucks, definitely under six

When I was a lad in the 90s, there was no shortage of cool Star Wars stories from Dark Horse Comics; like Dark Empire, Rogue Squadron, or Boba Fett. But back when the original movies were released, it was Marvel Comics that held the license to tell sequential art stories in George’s Galaxy (and they do again these days, due to Disney’s ownership of both Marvel and Star Wars). Between 1977 and 1986 they published 107 issues and three annuals of pure Star Wars magic, far out tales of a vast universe not yet constrained by heavy layers of continuity.

When I was young these issues were usually found behind the counter at comic shops and priced well beyond the reach of a kid with a few crumpled allowance dollars in his hands. I did find the odd issue for cheap in a bin here and there, but much of the series remained a mystery to me until Dark Horse started reprinting them in the 2000s. These days the average issue can be had for not a lot (usually under $10), especially if you don’t mind buying beaters for the joy of reading. I already had this story in a big reprint volume, but nothing beats reading an original issue; the sloppy Ben-day coloring, the yellowed pages, the old ads and the vinegar smell. But I digress, onward to the adventure!

Star Wars 49: The Last Jedi! is set between The Empire Strikes Back and Return of the Jedi. Han Solo is frozen in carbonite, Luke Skywalker knows Darth Vader is his father, you know what’s going on. You get it.

The art duties in this issue are handled by the Wonderful Walt Simonson, who illustrated and/or inked many issues and covers for Star Wars (he wrote several stories, too!). Walt is well known for writing/drawing Thor, but his fingerprints are all over Marvel and DC’s greatest heroes. His depictions of cosmic vastness and strange vistas were a perfect fit for Star Wars.

Luke, Leia, and the droids have followed a distress call to an unknown world in a Y-Wing starfighter, giving one of those old Alliance workhorses a moment in the spotlight. This Y-Wing is HUGE, seating four (later six!) crew with plenty of room for comfort. In the films the Y-Wing is a one man craft; per the Expanded Universe (and the Star Wars Holiday Special!) they can sometimes be fitted with a second seat for a gunner. This must be a jumbo sized deluxe version…a space station wagon, if you will? 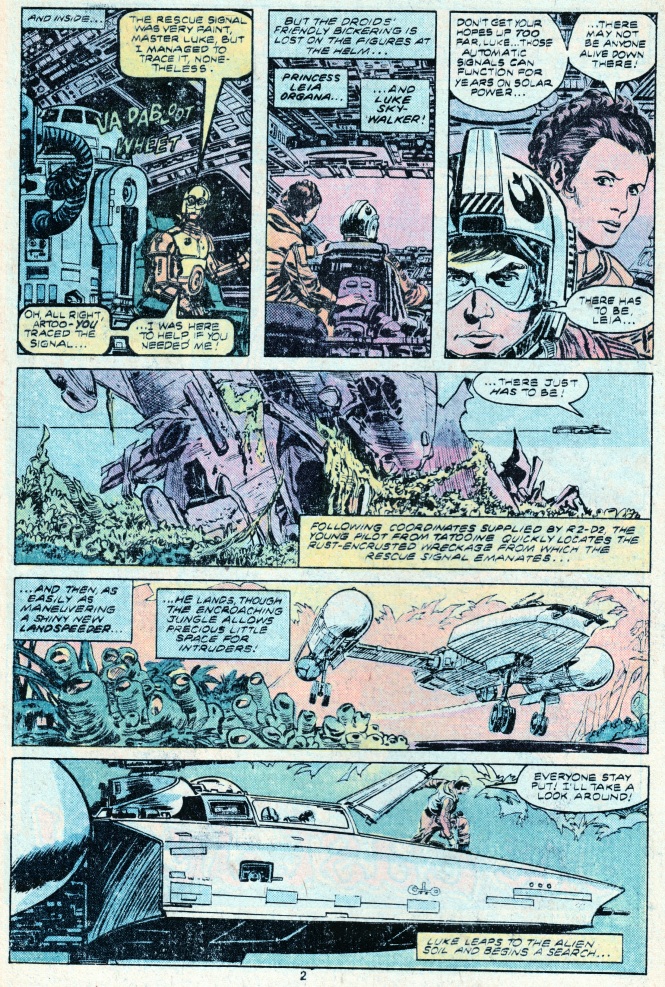 The Rebels have come to rescue a shipwrecked prince named Denid, of the planet Velmor. Denid fled his home with his betrothed and trusted advisor years ago when the Empire deposed his family. Tragically, when their ship crashed on the uncharted world his lady was killed, and his noble servant suffered damage to his brain. The advisor is an alien gentleman named Jedidiah, known as Jedi to his friends.

Jedidiah looks a bit like an early version of Beta Ray Bill, who Simonson would later create for Marvel. The roach-man was once sought out by the Jedi to join their ranks, but refused (perhaps his parents named him Jedidiah due to his Force-sensitivity?). This and the alien’s…impairment put a real bee in Luke’s bonnet, recalling the dickish behavior he exhibited when he first met Yoda in The Empire Strikes Back. Remember, when Yoda pretended to be a dope-smokin’ swamp man? Yeah, you remember.

but was he really pretending?

In hopes of inspiring an anti-Imperial uprising on Velmor, Luke and Leia return Denid to his homeworld. Then it’s disguise time! Throw on a couple of wigs and an eyepatch and the heroes are unrecognizable, even in a galaxy where their biometrics and precisely recorded facial details have been transmitted to the ends of the Empire. We meet Zelor, the sleazy regent; Anod, Denid’s pro-Imperial, Prince John-esque brother (about to claim the throne!); and Captain Traal, diplomatic representative of the Galactic Empire. We don’t see many female members of the Imperial military-Expanded Universe scuttlebutt has it that gender-based discrimination keeps them from getting far in the Empire’s service. Hey, at least the First Order made strides somewhere, right?

It turns out the people of Velmor have a “lightsaber” tradition of their own, they fight duels with “energy swords.” Luke is challenged to a “friendly” duel by Zelor and thinks he’s going to have to hustle the slippery Regent to avoid giving away his identity, but the old man proves to be an able swordsman. The Son of Skywalker has to give it his all when the two fight for real at the climax of the story…c’mon, it’s not a spoiler. Chekhov’s gun. It’s fun when Luke can cross blades with someone, as the last Jedi Knight in this era he has few sparring partners.

Mike Barr writes the beloved Star Wars characters well, and creates some new ones on a fun world. Most notable is the addled Jedidiah, titular Jedi of this tale, whose bravery at the end drives home to Luke that one cannot judge other beings by their appearance or demeanor. The Last Jedi! is really just a fantastic little story, with overall low stakes (the fate of a single world among millions) but a lot of heart. And you know what, Wagoners? It happened. Yeah, that’s right. As far as Space Station Wagon is concerned, the events in this story did take place in the galaxy far, far away. Canon.

Except for that oversized Y-Wing, that is an unforgivable continuity error. I kid, I kid. But seriously, there’s no reason to say it all couldn’t happen in the galaxy far, far away.

No more story tidbits for you, grab the comic (it’s a one-and-done, single issue tale) or pick it up in one of several reprint volumes released by Dark Horse. But before you go, check out some cool Walt Simonson Star Wars scenery. May the Force Be With You!