Valerian and the City of a Thousand Planets hits theaters this weekend. Since Space Station Wagon is a survey of scifi and a conspectus of comics, I thought I’d clue any curious cats in. 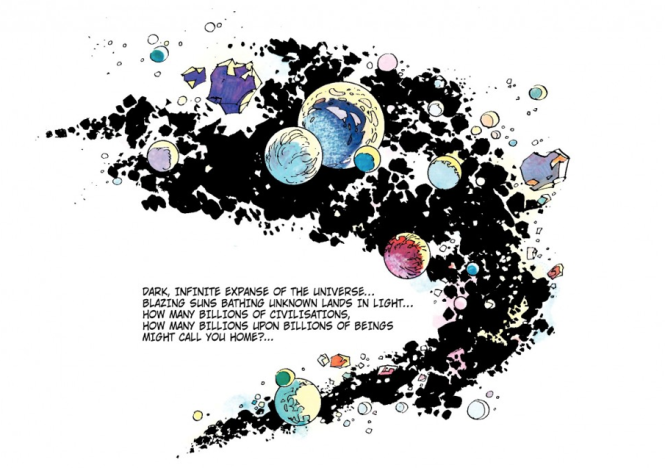 Valerian and Laureline is a French comic strip written by Pierre Christin and illustrated by artist Jean-Claude Mezieres, first published in 1967 in the pages of the French comics magazine Pilote. I must confess that I’ve only read the first two volumes, The City of Shifting Waters and The Empire of a Thousand Planets, but I’ll do my best provide un precis complet (I’ve been dusting off my high school Francais to read some of the collections that are not widely available in English yet)! I’ll just be giving basic beats of plot, so don’t worry about being spoiled for the movie. 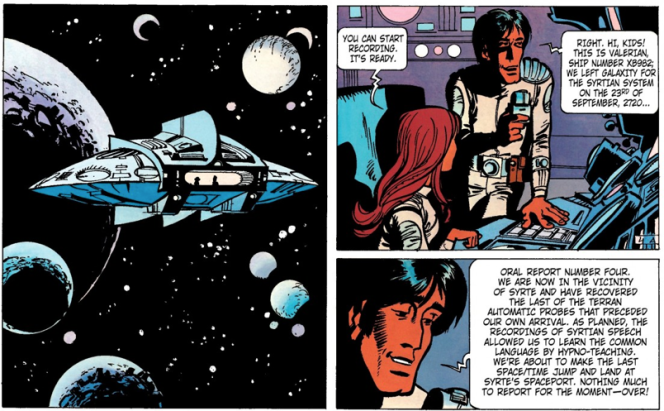 The two titular characters are “Spatio-Temporal agents” for a political entity called Galaxity, the government of Earth in the 28th Century. Galaxity is a benevolent government ruled by scientists (Dear God that sounds so beautiful right now), and V&L are troubleshooting operatives who deal with threats and solve problems throughout space and time. It’s got a lot of the freewheeling, go anywhere/anywhen fun of Doctor Who (which predates the strip by only 4 years) mixed with the “Space Patrol Authority Figures on a (Righteous) Mission” of Star Trek (which beat it by just 1 year). What it shares with both is a boundless sense of adventure and the thrill of journeying into the infinite.

The actual first V&L tale published in Pilote was called Bad Dreams, but it is usually considered “Volume 0” because the story wasn’t released as a collected edition until much later. Bad Dreams chronicles Valerian and Laureline’s first meeting (which I won’t go into here in case it spoils the film) and was translated into English only very recently. What’s generally known as “Volume I” of is the story The City of Shifting Waters, chronicling a mission to catch a criminal from the future who’s hiding out in the flooded ruins of New York City in 1986. Galaxity, like many science-fiction utopias, was born out of disaster and ruin in the late 20th or early 21st centuries:

Accidental detonation of a nuke stockpile melted your icecaps, huh? All we had to do in our universe was pump tons of CO2 into the atmosphere! City is a fun romp through the streets/canals of flooded NYC, a city that I have lived in/near for a good portion of my life and one I will always enjoy seeing in ruins. Mezieres’s art style is cartoonish, yet insanely detailed.

In the past few years there’s been a lot of buzz about a certain movie series “borrowing” a lot of Mezieres’s designs…a little multi-billion dollar film franchise called Star Wars. This becomes very apparent in the second volume, The Empire of a Thousand Planets, a more “space-y” story in which the duo investigates a newly discovered solar system. Note Valerian’s saucer-shaped space/time craft, looking a lot like Han Solo’s saucer-shaped Millennium Falcon:

Check out the helmets worn by this order of monks, which have shades of both Darth Vader and Boba Fett (not to mention what’s under the monks’ helmets-which I’ll hold off on showing to avoid spoiling a dramatic reveal in the film):

What the hell, Empire? Even the equipment in the freezing chamber looks the same! There are more examples like this, from volumes I haven’t read yet (did you like how I managed to get two pictures of Lando in here? you can always use more Lando).

The chances of these being coincidence are…cosmic, to say the least. While it’s been fashionable to hate on George Lucas for years, you can’t really pin this on him. The designs in the Star Wars films were the result of dozens of talented concept and storyboard artists, propmakers, special effects pioneers…and it looks like a few of them may have cribbed some imagery created by Jean-Claude Mezieres for Valerian and Laureline. Well, imitation is the sincerest form of flattery…and since I first learned of the comic strip a while back in a blog post pointing out the similarities in Star Wars (and I’m sure I’m not the only one) I wouldn’t have otherwise even known about Valerian until now. I’m sure the Trilogy’s homages will become wider known now, with all the buzz about the strip generated by the movie. Mezieres himself addressed the issue at one point: 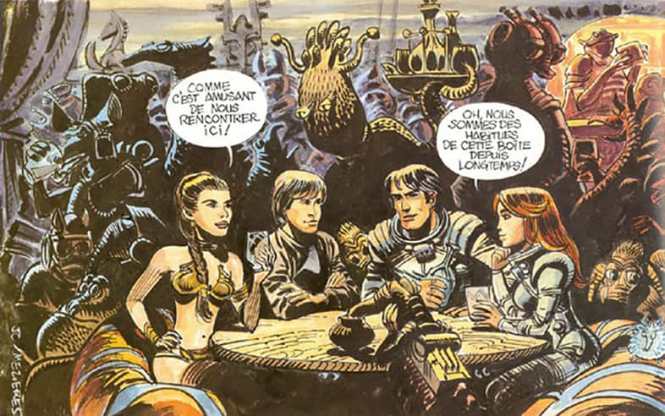 “It’s funny, seeing you here!” “Oh, we’ve been here for a long while!” – something to that effect

So, there’s that movie coming out this weekend. Will it be cool? Will it be uncool? It’s directed by Luc Besson, who made The Fifth Element (another movie that borrowed a lot from V&L). If the film doesn’t take itself too seriously and has the fast-paced fun of T5E, I think it should be pretty good.

I do think there’s a very decent chance that it will flop with the general moviegoing public, as these days most films that aren’t part of a long-running franchise tend to. Also, Valerian’s long history in print but total obscurity with modern audiences reminds me of John Carter, a film famous for being a flop. There’s a lot of reasons why JC failed, most notably a crowing entertainment media that eagerly sandbagged the film in the public eye before its release. Disney’s marketing people also had no idea what do with the movie; “Of Mars” was lopped off the end of the title in one of the most boneheaded movie marketing moves in history, and the film’s advertisements relied way too much on the “INSPIRATION FOR STAR WARS!” crutch that made a lot of people not familiar with the century old book series go “yeah fucking right.” The movie also has to contend with people wanting to see Spider-Man: Homecoming and Dunkirk…like myself.

Then again, it could catch some of that Guardians of the Galaxy “weirdness in space” magic. GotG had the Marvel name going for it but was a property that Joe Public knew nothing about; surprisingly it did very well and has become widely beloved. Valerian’s trailers have helpfully noted that the movie is based on a graphic novel, and people who don’t read comics love films based on graphic novels! They also love the term “graphic novel” (sorry, that was elitist and bitchy. I love films based on comics too).

Even if Valerian is trashed at the box office and dumped on by critics, curiosity and exposure will surely introduce the comic strip to a whole new generation of fans. I myself still have something like twenty more amazing volumes of Valerian and Laureline to read, and I’ll enjoy those whether the film is fantastic or a fart. I’ll leave you with some more awesome art from The Empire of a Thousand Planets. Do yourself a favor and get your hands on some of these books for perfect summer afternoon reading!