Last week the trailer for Rogue One hit Youtube. I’ve been leery of the idea of Star Wars anthology movies since they were announced last year; I worry they will make the trilogies less special and I don’t want the release of a Star Wars movie to feel routine (Disney wants to put out one a year!).

Rebels with a cause

I’m also not thrilled with the idea of origin story movies. I love characters like Han Solo, Yoda, and Boba Fett, but I don’t need to see HOW they became who they are. I know who they are, what they stand for, and what they did in those movies we all enjoyed. But it looks as if Rogue One will show us the nuts and bolts of a part of the movies we never learned much about in the first place, the Rebel Alliance. In the original trilogy the camera is focused on Luke and friends, relegating most of the other members of the organization to Redshirt status (sorry Biggs, Porkins, and Dack). We don’t even meet the leader of the outfit or their chief military commander until Return of the Jedi! Did we need to know any more information to understand who they are, or to enjoy watching the films? No, but is a story about their rank and file members or unsung heroes welcome? Yes, assuming the characters are interesting. Since Star Wars recently wowed me with the new characters in The Force Awakens, I’ve got a good feeling about this.

This picture represents my relationship with Star Wars

The first shots in the trailer hooked me; we see the hanger of the Rebel base in the Great Temple of the long vanished Massassi people on Yavin 4 (I still have that Micro Machines playset somewhere). The base is a hive of activity and full of original trilogy throwbacks, like Gonk Droids and Alderaanian Rebel Troopers (with very Ralph McQuarrie-esque symbols on their beetle helmets).

Here’s a few shots of the characters. Check out those cool tactical displays in the war room at the Rebel Base! It’s like they never struck the old set from Episode IV.

One of the biggest WOW! moments of the trailer was the appearance of Mon Mothma, the head honcho of the Rebellion (the woman in the white robe). Mothma was an Imperial (formerly Republic) Senator who founded the Rebel Alliance along with Senator Bail Organa of Alderaan (Leia’s adoptive father). The Senator was first portrayed by Caroline Blakiston in Return of the Jedi, and “later” by Genevieve O’Reilly in Revenge of the Sith. Most of O’Reilly’s scenes and all of her dialogue in that film were cut, so I’m glad she was able to come back to the Star Wars universe for Rogue One. Imagine playing a bit part, then ten years later Disney blows up your phone to ask if you want a ton of money to be the same character again! Only in science fiction, right?

If you follow the Star Wars Expanded Universe (like I do) you probably had a double take moment when you saw a man in a fly-as-fuck white Imperial officer uniform with a cape.

I thought this was Gary Oldman. It wasn’t!

The reason why some fans may be hyperventilating is because this gentleman looks a lot like an Imperial Grand Admiral; an elite group of twelve commanders at the top level of the Imperial Starfleet. The most notable of these master tacticians is Grand Admiral Thrawn, who first appeared in the 1991 novel Heir to the Empire by Timothy Zahn. Thrawn assumed control of the Empire a few years after Return of the Jedi, uniting the warring remnants of the Imperial military and restarting the cloning of stormtroopers. He’s also one of the few aliens to make it far in the Empire’s service.

Thrawn was rendered non-canonical along with the rest of the Expanded Universe before the release of The Force Awakens, but the new Star Wars galaxy has kept a lot of older elements from the novels, games, and comics. BUT; on closer examination, this (P)Imperial may have his roots entirely in the films: 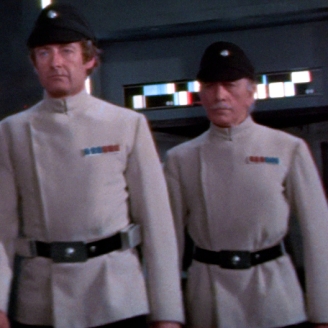 These officers appeared on the Death Star in A New Hope. The EU lore has them pegged as members of the Imperial Security Bureau, an internal intelligence organization that has wormed its way into the New Canon via Star Wars: Rebels (Agent Kallus works for them). It would make sense for the cape-clad cat in the Rogue One trailer to be a security officer, tracking a gang of rambunctious rebels as they rough up stormtroopers to rob the Empire of the schematics to its secret superweapon.

And what a superweapon it is! It appears we’ll see the final stages of the construction of the Death Star. Here they are; plugging the dish in.

Something that earned a *GASP* from myself was the appearance of a Type-I Imperial Star Destroyer. The appearance of the standard, non-Super Star Destroyer changed slightly between Episodes IV and V; the “radar tower” between the balls on top got shorter and there were some other cosmetic alterations to the model. The fact that the people making this film paid attention to such tiny details gives me a lot of confidence!

To get those Death Star plans the Rebels are going to have to tangle with another classic symbol of Imperial might: STORMTROOPERS. It was awesome seeing so much stormtrooper action in The Force Awakens, but to see the classic version of the plastic-armored goons in action again fills my heart with joy. All Terrain Armored Transports (AT-ATs) make a stunning appearance as well:

One sequence takes place in what appears to be an Imperial subway station…on the Death Star? Coruscant? Some other place under the authority of the ITA (Imperial Transit Authority?) I’m not sure if what the Rebels are running past is a stopped train or a partition separating the platform from the edge of the track; that would be like how subway stations in South Korean cities are laid out. Also, like subways in South Korea, the station is EXTREMELY clean.

The trailer is positively flush with new Imperial troopers and hardware. There’s the beige troopers in the subway station above (Conductor Troopers? Transit Cops?), the elite-looking black armored unit, and some other new guys piloting a tank. A friend of mine complained; “where were all these different troopers in the classic trilogy?” Well, you only see snowtroopers in Empire Strikes Back, and have to wait until Return of the Jedi to see biker scouts. It’s a big galaxy, and the Empire has a lot of different stormtroopers to effectively put a boot to its neck.

The Emperor’s Royal Guard represents as well…and who is the cloaked figure kneeling before this white column? Darth Vader doesn’t wear a hood! If it’s Emperor Palpatine, why would he be kneeling to anyone? Could this be Supreme Leader Snoke, head of the First Order in The Force Awakens? Supplemental material to that movie tells us that Snoke has been around for a long time, even as far back as the Galactic Civil War.

Let’s finish out with the last shot of the trailer, which immediately reminded me of the round corridor Luke walks through on Cloud City in Empire. Jyn Erso appears to be wearing a TIE pilot flight suit, but under what circumstances? Is she using the classic Rebel tactic of wearing Imperial duds to infiltrate a secret facility? Or will she turn on her allies? Can’t wait til December to find out!

2 thoughts on “I got Screenshots of and Opinions on Star Wars: Rogue One”