I had these when I made my last post but forgot to post ’em (I was wearing one when I wrote it!); Courtney got me a shirt featuring some Outer Rim desert planet I had never heard of and her brother Danny got me a classic Superman tee. 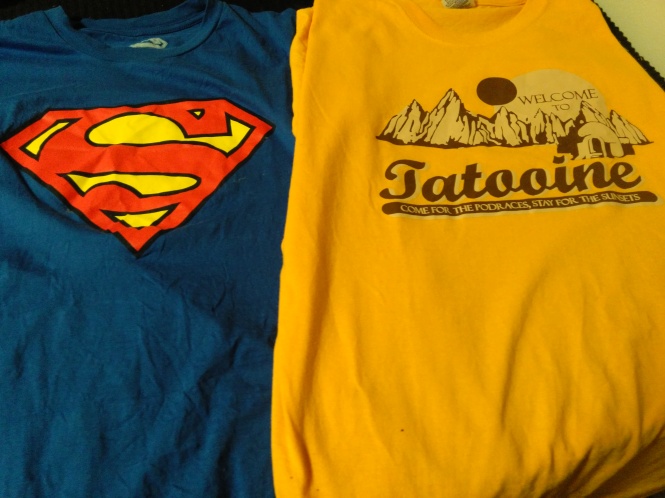 Now I have all the parts of a New 52 Action Comics Superman IN MY CLOSET. 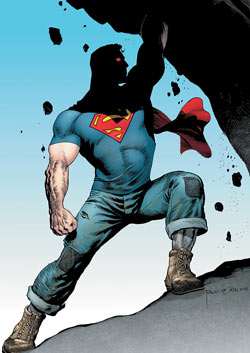 Before we left for Courtney’s parents’ house my buddy Max gave me an awesome Iron Man trade paperback collecting an early 90s adventure dubbed The Dragon Seed Saga (featuring the origin of the dragon Fing Fang Foom!…expect a review sometime soon). Max also had me in the Action Figure Secret Santa my friends and I do every year, and presented me with The Creeper from the new toy line based on Batman: The Animated Series. You know, THE animated series. From THE amazing DC animated universe of the 1990s-early 00s. The figure is great, a Steve Ditko creation by way of Bruce Timm! His outfit comes from a women’s clothing store he ransacked. He comes with multiple pairs of hands, a pool cue, a rat, and a creepy Batman mask. I don’t remember exactly what he used these for since it’s been a long time since I’ve seen this episode or any Batman TAS, clearly a rewatch is in order one of these years. Anyways these Batman TAS figures are really neat, they’re super articulated (any previous DC animated universe figures were essentially statues) and it’s interesting to see Timm’s very stylized 2D art represented in a 3D shape. 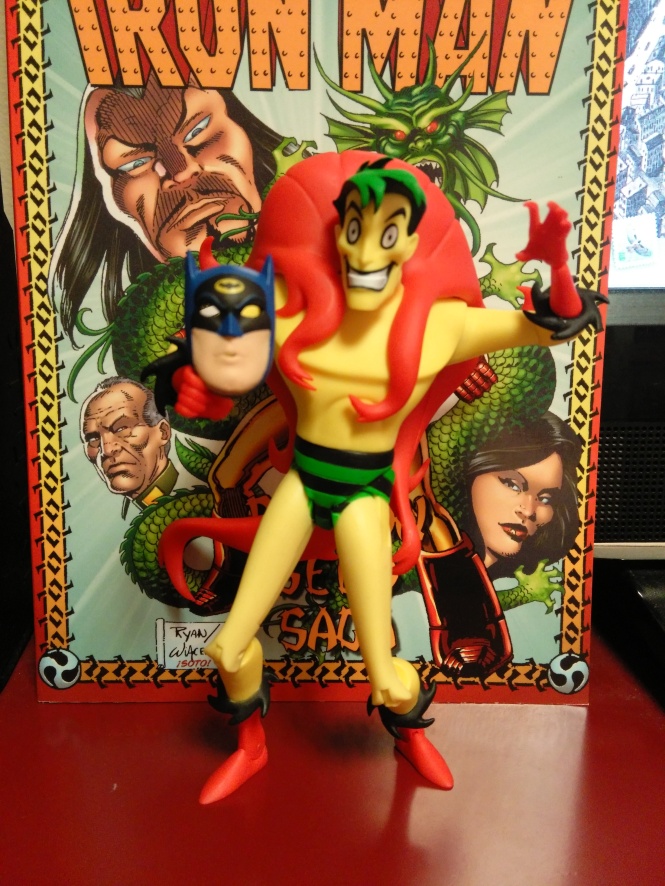 Makes The Creeper look even creepier!

When we returned to our house we had more Christmas surprises! For one thing, our apartment was cleaner than when we left it, thanks to my friend Mike! Mike watched our cat while we were gone, and also is enthusiastic about cleaning when he’s bored!  Our apartment is very old and has a lot of fixtures, tiles, floors etc. that are just plain permanently grubby, including our kitchen sink. There was always a grey and yellowish cast to the bottom that I couldn’t get up no matter how much kitchen cleaner I scrubbed it with. Mike apparently had no time for that nonsense and nuked it with bleach, leaving it pristine and sparkly white. A Christmas Miracle!!!

One of the days Mike came up to look after our cat he brought our friend Chris, who has lived out in Los Angeles for a few years. I don’t get to see Chris often and this year our holiday schedules didn’t sync up much, he got in a few days before I left but went back west the day before I returned to NJ. But we did get in a night of catching up with beer, pizza, and video games. And when Chris came up to our house with Mike, he left me a present! 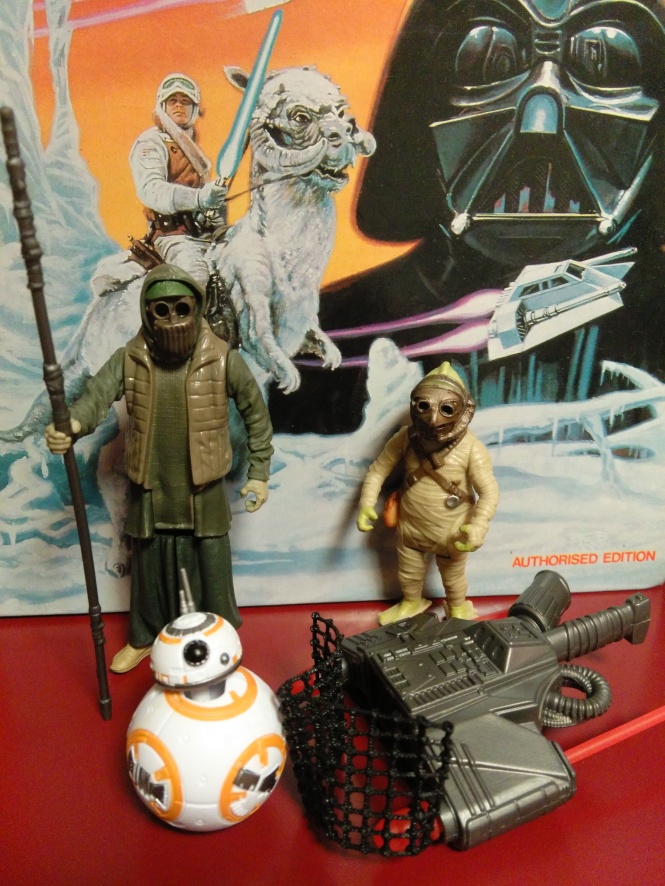 Yeah that’s right. That’s BB-8 (Ball-Two DeeTwo) from Star Wars Episode VII: The Force Awakens. You’d think that BB-8 would have been included with one of the main character figures since he’s (she’s? I’ve seen BB-8’s “gender” both ways in TFA material) about the size of a small accessory that could be packed with a 3.75″ figure. No such luck, but at least when they did make BB-8 they packed her with plenty of accessories, including two desert scavenger figures and a huge capture…net launcher thing. But that’s just gravy, because BB-8 is the real star of the set. Her (his?) head is on a post that terminates in a ball joint in the body, making the figure capable of many different sassy BB-8 poses.

I didn’t intend to go wild with figures from The Force Awakens, but these plus what Courtney got me have left me with a cool little collection. Just wanted to make these posts about the Sweet Star Swag I got because I am really blessed with a girlfriend, family and friends who all really love me and know what makes me tick. Love you guys! May the Swag be with you!

P.S.- Also got a pack of Star Wars tissues from my sister! Two ply!!! 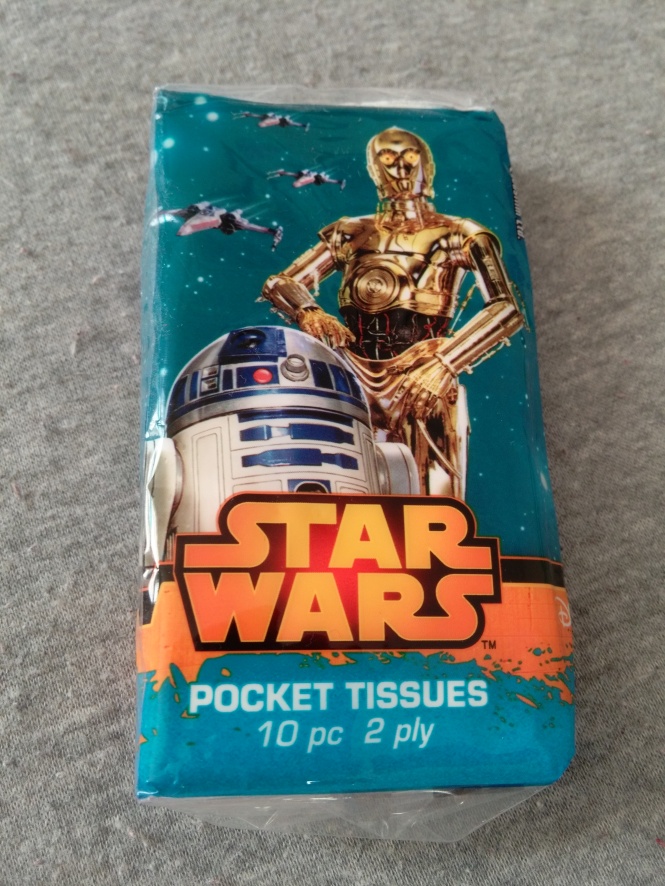