(spoilers for The Last Jedi ahead! It’s been…months. If you haven’t seen it yet I can only assume you’ve been waylaid by bounty hunters on Ord Mantell, or have been prospecting out on Subterrel)

Star Wars Episode VIII: The Last Jedi is a Star Wars movie like none other…now with that hook, am I about to praise the film or take a big steaming bantha poodoo on it? You don’t know! The internet has given me the impression that it’s been divisive. Reception also varied among my friends, some loved it, a few hated it, and I think some may just be burned out on the galaxy far, far away.

I can’t discuss my feelings on The Last Jedi without weighing in on The Force Awakens, which I never got around to writing about when it was released (I’m not 100% sure this site existed when that movie came out, actually). 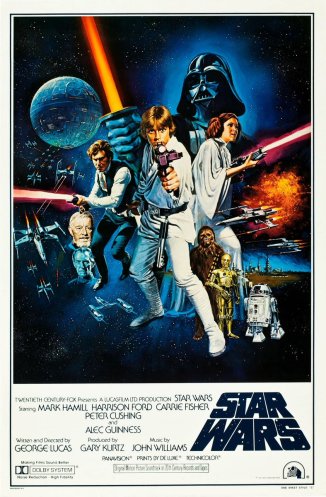 I really enjoyed Awakens…but I recognize it was cynically engineered by a bloated media conglomerate to trip all of my brain’s nostalgia circuits. JJ Abrams took the original Star Wars films, sequenced their genetic code in a Disney laboratory, then spliced it together with some new material to make a commercially safe movie that was sure to appeal to old nerds approaching their twilight years in scary, uncertain times. You’ve got a young hero looking out to the horizon on a desert planet, searching for the truth about their parents. A precocious robot is carrying information direly needed by a plucky band of rebels. There’s a masked villain in thrall to a wizened evil overlord, leading white armored, faceless henchmen. The iconic starships all put in appearances, slightly altered to sell new toys; and then there’s another giant battlestation capable of annihilating planets (and this wasn’t the first time they re-hashed that!)…Awakens just doesn’t tread a whole lot of new ground.

That’s not to say I don’t really love The Force Awakens! I loved it when I first saw it in theaters, and I still love it two years on! I can appreciate it in an emotional “I LOVE STAR WARS” sense while recognizing on an intellectual level that the film is a nostalgia cash in. It may not be perfect, but no Star Wars movie made after the Original Trilogy was going to be.

TLJ’s trailers made me very nervous in the months leading up to its release. It showed Rey training to be a Jedi under the tutelage of an aged master in a remote location, walkers marching across a snow-covered landscape…if TFA was derivative of Star Wars, was TLJ just going to be a re-hash of The Empire Strikes Back? I had a sinking feeling as December approached, worried that the new trilogy would never move beyond slavish adherence to classic Star Wars formulas.

The Last Jedi threw all of that out, like Luke chucking that lightsaber over his shoulder.

The Last Jedi does echo The Empire Strikes Back but doesn’t ape it. The similarity lies in that absolutely nothing works out for the heroes in this film. Rey, Finn, Poe and Rose get dealt dirty again and again as space opera meets hard, hopeless reality. Nothing works out for the villains either, now that I think about it. Classic Star Wars Saga tropes are dredged up and subverted left and right….

After damaging the First Order’s Dreadnought, Poe Dameron defies Leia’s orders and leads the Resistance’s bomber fleet in all out assault to finish the powerful vessel off. In the Star Wars universe you’d expect this derring-do to pay off with an exploded evil super-ship, but in The Last Jedi Poe completely miscalculates and all of the Resistance bombers are wiped out. Hey, they can’t all turn out like the Battles of Yavin, Endor, Naboo, Starkiller Base, or Scarif (to be fair, everyone on the ground at Scarif died too)! Leia busts Poe down in rank, and after she is incapacitated the hotshot Resistance hero is sidelined by meanie Admiral Holdo (who in another twist turns out not to be an ineffectual, meanie bureaucrat, but one of the film’s biggest badasses).

it really blew up in his face

Finn and Rose’s cockamamie scheme to sabotage the First Order’s hyperspace tracking sensor array…doesn’t work out. Old Man Skywalker isn’t patiently waiting on that island to train the first of a next generation of Jedi…he fled there to hide, disillusioned and full of self doubt after nearly murdering one of his students. Rey finds out her parents were nobodies who abandoned her on Jakku, and the Resistance’s allies never respond to their distress call. Admiral Ackbar dies in the first ten minutes and it barely rates a mention!

YOU KNOW HE DESERVED BETTER

This is a Star Wars film for a grim age. You know what’s going on out in the real world. You get it. The Last Jedi reflects our apocalyptic, hunted feelings. It channels the hopelessness of young people coming of age in hard times, and the disappointment of the older generation who have seen everything they’ve built tested to its limits.

Evil is ascendant, and things have never been bleaker for the heroes. Following the destruction of the New Republic’s fleet and capital planet in The Force Awakens, the First Order has stormed the galaxy, terrifying star systems into submission. This heir to the Galactic Empire is a nightmare from out of the past; their victory makes it seem that the Rebel Alliance’s struggle was all for nought.

The Last Jedi goes beyond showing Imperial/Sith style fanatical evil; it also offers up villains of the avaricious and cynical variety. In a film that inverts many Star Wars tropes, one of the best comes when Finn and Rose go off on their sidequest to find a Master Codebreaker. When Rose remarks that their destination is a cesspool of “the worst kind of people in the galaxy,” you’d expect the film to cut away to a dim, grimy underworld location a la the Mos Eisley Cantina or Jabba’s Palace. Instead we travel to Canto Bight, a genteel, brightly lit city of classy casinos and slick luxury landspeeders more along the lines of Monaco or Ibiza.

Finn marvels at the chic casino city until Rose tells him to look under the glitzy facade to see the misery that sustains it. The worst people in the galaxy, you see, are the ones who make so much money selling the weapons used in all of these Star Wars. The denizens of Canto Bight also use children for slave labor and abuse animals; this is for the less woke members of the audience, who don’t see why people profiting off a civilization’s misery isn’t enough of a reason to have their city ruined by stampeding space horses. In an era where income inequality is insanely high and most of us couldn’t scrape together $200 for an emergency, it feels good to see the rich elite get their comeuppance, even if it is in a galaxy far, far away. 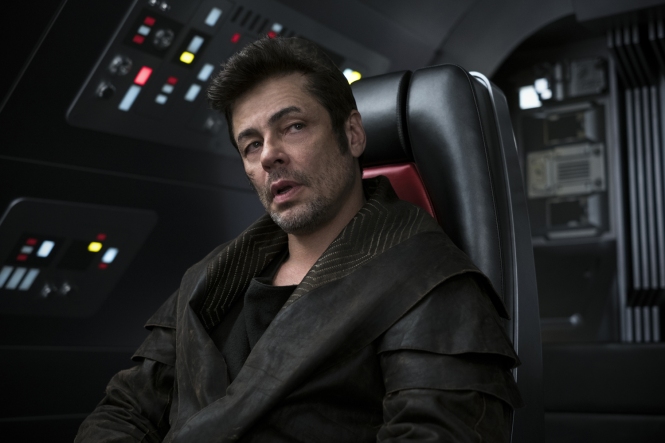 The casino city is also where we meet Benicio Del Toro’s amoral hacker known only as “DJ.” A counterpoint to the idealistic heroes, DJ’s worldview is that the Resistance and First Order (and presumably the Rebels/Empire, the Old Republic/Separatists before them and so on) are both sides of the same coin, pointing out the rich war profiteers of Canto Bight sell to the good guys and the villains alike. If the monied misery merchants are a Star Wars-y reflection of our world’s rich, DJ mirrors the cynicism felt by so many ordinary folk today. If the world is in the unbreakable grip of such awful people, why even fight for something better?

DJ’s part in the film inverts another trope. As he, Finn, Rose and BB-8 infiltrate Supreme Leader Snoke’s Star Destroyer, you think the heroes are winning him over. He gives Rose her necklace back, right? And didn’t Luke and Leia’s idealism crack Han Solo’s tough shell back in Star Wars? But when he and the heroes are captured by the First Order and the chips are down, he sells them out immediately.

Move over, Empire! The Last Jedi is the darkest Star Wars film yet (not counting Ewoks: The Battle for Endor, when Cindel’s family dies in the first five minutes). The whammies hit early and hard, and they don’t let up.

This is not to say TLJ is some sick fuck movie that delights in making you cry. My favorite new character in the movie is Kelly Marie Tran’s Rose Tico, a Resistance mechanic from an impoverished star system that suffered at the hands of the First Order (she also loses her sister in the film’s opening battle). Rose has every reason to despair and be bitter, but remains the movie’s most hopeful character. After stopping Finn from throwing his life away on a suicide run near the end of the film, she tells him “let them fight for what they hate…while we fight for what we love.” 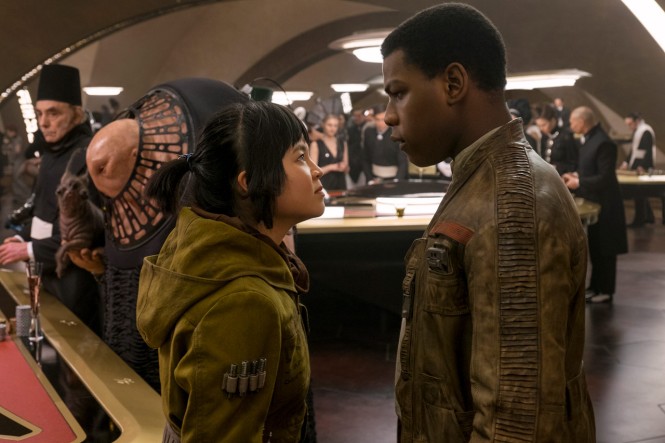 I’m not saying that this film is going to help people suffering injustice in the real world, or that it’s highbrow intellectual criticism of capitalism. It’s just a movie, with rubber aliens and CGI starships. It was made by a massive, evil conglomerate to sell action figures and video games (the unstoppable Disney juggernaut makes George’s “two hour commercials for collectibles!” operation seem like a quaint small business). But these days, when the news is filled with awful people controlling the world and cavorting like pigs in shit…it’s comforting to feel like somewhere, in a galaxy far, far away, there’s a star cruiser full of people who believe as you do. Freedom fighters who believe that evil, in any form, must be opposed; a scrappy gang of friends battling mechanized, armored evil in trackless deserts and arctic wastes to fight for the the downtrodden. We are all that kid from the end of The Last Jedi.

The SpaceStationWagon team (it’s me. it’s actually just me.     ) was unanimous in deciding after our single viewing that The Last Jedi RULED; it redeemed The Force Awakens and let this era of Star Wars come into its own. It tossed out the manual to the Saga that was so dogmatically adhered to in TFA and cleverly inverted Star Wars tropes, all while treating the characters and universe with love. If you’ve got opinions on why TLJ was cool or valid reasons why you think it’s uncool, let me know in the comments. People hating and ranting about Star Wars movies…it makes me feel young again!

There’s much more about the greatest Star Wars movie in 34 years that I’d like to talk about soon, so stay tuned! May the Force be with you, Space Station Wagoners. Always.