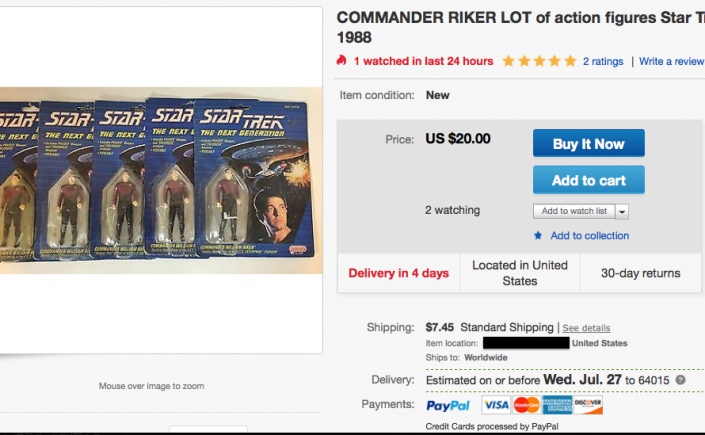 This auction is long over by now, meaning some lucky s0-and-so had five Commander Rikers shipped to their home. Wanting to own a little plastic totem of the handsomest space-dad in the galaxy is not questionable in and of itself…but buying Riker quintuplets is. What could someone do so many Rikers?

Even if you’re a Vulcan Master of Star Trek collecting you may not be familiar with these old Kenner-esque figures, the ~5″ Playmates line from the 90s is far more well known. My friend had ALL of the TNG Playmates figures when we were kids (plus the Transporter Room Playset) and they were AWESOME: 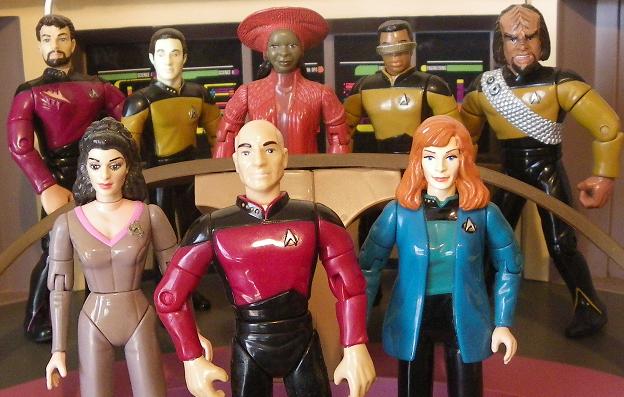 When I first saw these other figures at a convention I thought they were something that fell out of a parallel universe (like desperate, crazy-bearded Riker in the above slideshow); but in fact there was an earlier set of 3.75″ The Next Generation figures released just as the show began airing. These toys were made by Galoob, best known for producing Micro Machines (they were later gobbled up by Hasbro):

You can tell they’re from early in The Next Generation’s run because the set features beardless, babyface Riker and the unfortunate Tasha Yar, who perished late in the first season of the show. The uniforms are the collar-less, formfitting jumpsuits that lasted until the end of the second season (they were loathed by the actors), and Worf and Geordi rock theirs in command division red. On the villain side we have Q (Captain Picard’s Great Gazoo/Mr. Mxyzptlk-esque omnipotent nemesis), a Ferengi crewman, and individuals of the Antican and Selay peoples (who were featured prominently in just one episode, Season One’s “Lonely Among Us”). 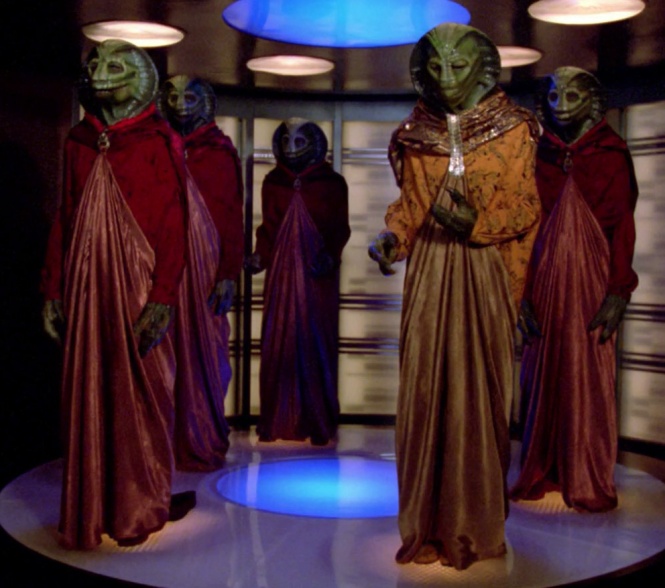 the Selay were a really cool design, I wish we had seen more of them in TNG (though they appeared as background aliens in various episodes)

The figures are very well done, with great likenesses and proportions on the Enterprise crewmembers (TrekCore has an awesome, three-part series offering a closer look, including the weird early versions of Data’s face). The only downside is that the phasers are molded into their hands…what, is Picard going to negotiate a treaty between the Anticans and the Selay at gunpoint? That doesn’t sound like Jean-Luc. My favorite piece of weirdness is the Ferengi fighter, made as a counterpart to the Starfleet shuttlecraft. The designers shrunk the vast Ferengi Marauder starship (on par with the Enterprise-D in size) down to to be a one-man fighter: 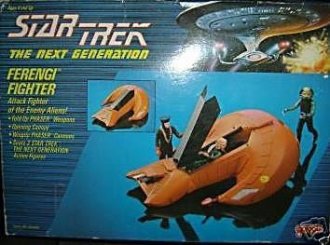 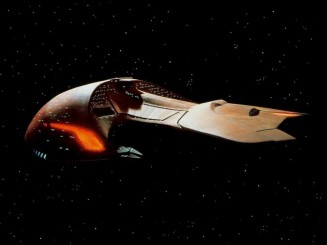 Alas, the Galoob TNG line was not a big seller and was cancelled after the first wave of figures and a few small vehicles had been released. Kickass images of unreleased prototype items circulate on the internet, including an Enterprise playset and Wesley Crusher in his amazing “junior crewman” getup. 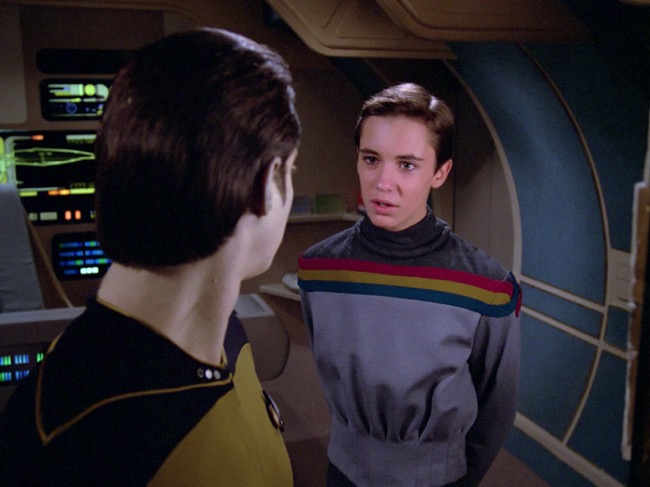 all three division colors, because he’s three times as smart as the rest

These days one could be forgiven for mistaking them for those nostalgia baiting Funko Re-Action figures; a line of 3.75″ scale plastic men depicting characters from beloved movies and TV shows in the style of Kenner’s classic Star Wars line (Funko has actually made a set of TOS characters!). 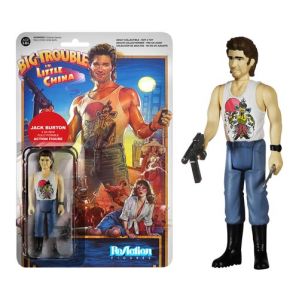 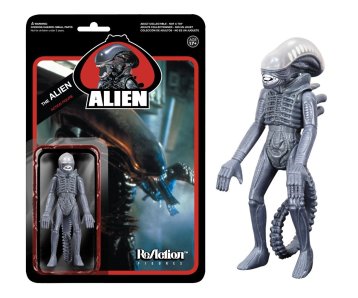 I have had to talk myself down from blowing a lot of $$$ on some of these, believe me.

This cancelled Original Series would later be followed by The Next Generation of Star Trek figures from Playmates (sorry, couldn’t resist), leaving the Galoob line an interesting footnote in the history of the franchise’s collectibles. It was the dawn of the merchandising blitz that came in the 90s, when Star Trek was king of the airwaves and had recently put out several high grossing, critically acclaimed movies. Next Gen was enjoyed by “normal people” and consumed in a way it hasn’t been since; after TNG the series’ popularity dwindled until the J.J. Abrhams movies made Star Trek enjoyable for non-Trekkies again. 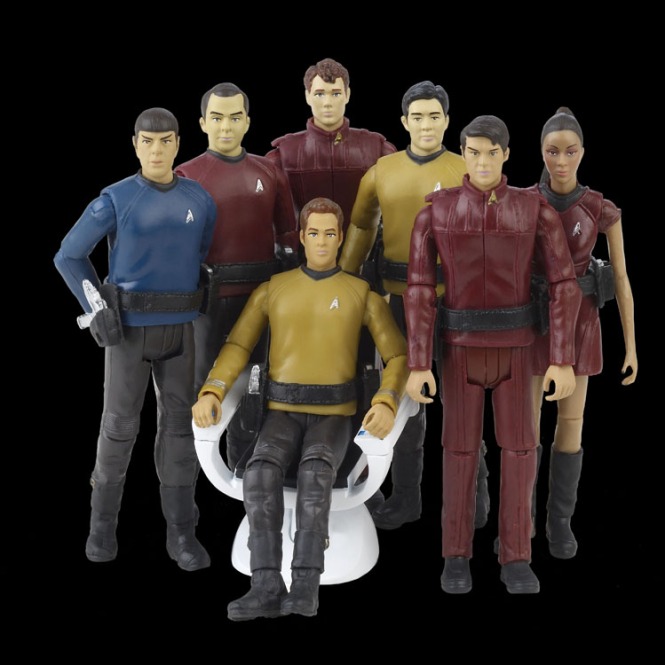 A neat line of action figures was released for Star Trek (2009), alas I was too cash-strapped at the time to partake (I did get the sick Kre-O USS Enterprise though). Star Trek merch has mostly been high-end, adult collector-oriented replicas for a long time, and it remains to be seen if we will again see a mass marketing blitz on the same level as the ones for Star Trek: The Motion Picture or The Next Generation-era TV shows in the 90s.

Huge toylines for movies/TV seem to be on their way out in general, Hasbro has even dialed it back for recent Star Wars movies. Maybe if Star Trek: Discovery can fire up the public imagination we’ll see lots of Trek-swag released for general consumption again; but I’d settle for the series inspiring us to pull out of this ignorant, conservative spiral we’ve been in.

Live long and prosper, Wagoners. Before you go, enjoy this bonus Riker from the Enterprise’s picture day: 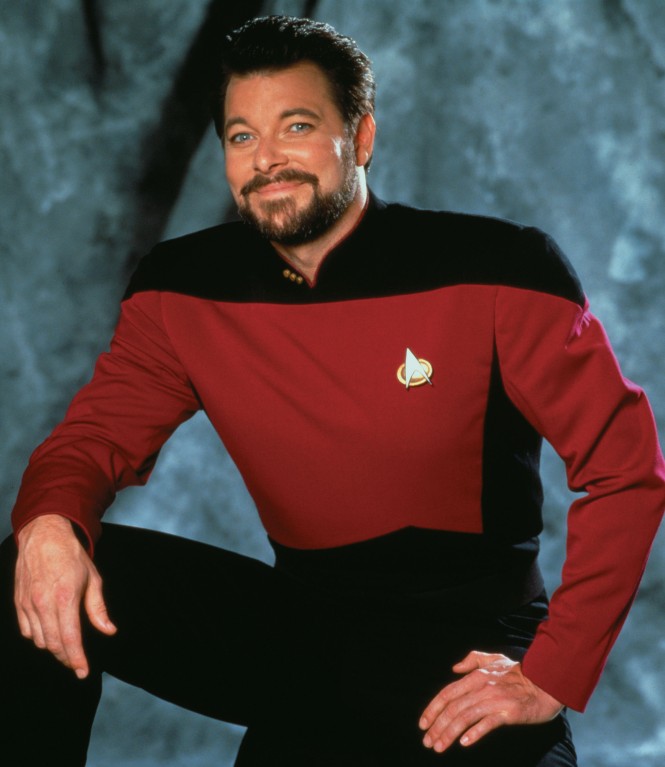 always Number One in our hearts